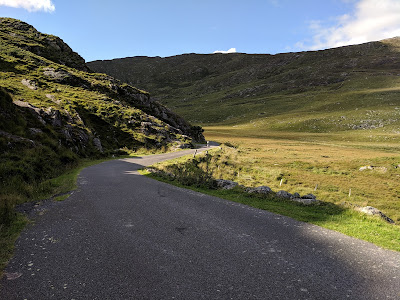 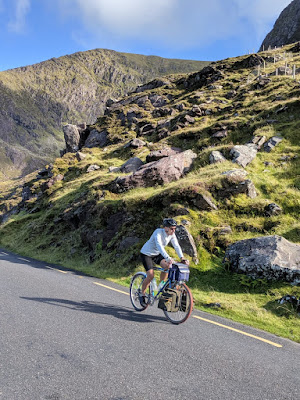 We were lucky enough to spend two weeks this fall riding in County Kerry (plus a little in Cork) up and down the peninsulas and up and over the many stunning mountain passes. 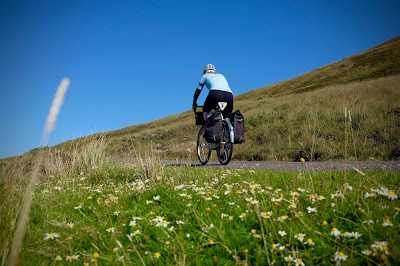 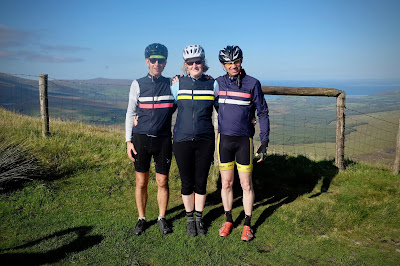 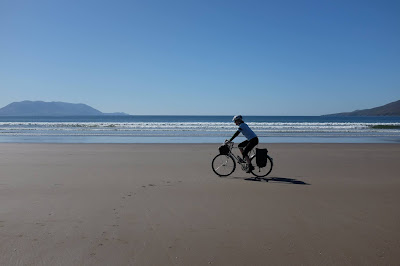 Our trip was long planned, but it was really only in the last few weeks that we honed in on our plan specifically and key in that process was spending an evening with the Fixie Pixie and Fear Rothar who helped me narrow down the region and how much we might take on in a trip of this scope. After years of touring the country and knowing that what was good for them would be good for us, I felt lucky to get their help. Their advice was just what we needed and I felt a sense of confidence and direction about our trip. 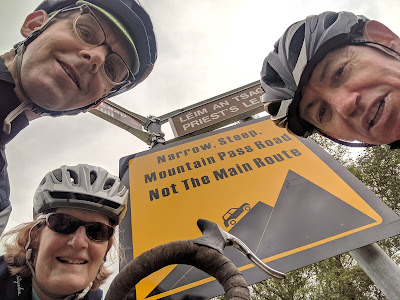 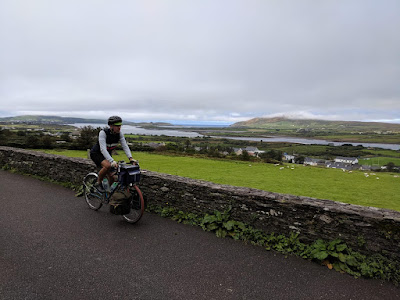 We again travelled with our pal James and met up in Dublin. A night out in Temple Bar and then a train the next day to Killarney landed us at the start of our journey. We started with a bang by heading up through the Gap of Dunloe in the mist. What a stunning start to our trip! Despite the cars and horse drawn carts we reveled in the climb. As we crested the top the mist turned decidedly to rain and we were quickly saturated. By the time we'd reached the bottom of the other side we were deeply chilled and in need of food and warmth. Gladly, there was a small restaurant not far away and we were restored to continue our journey on towards Moll's Gap. The way broadened out in to the Black Valley and we continued to marvel at the beauty. Sheep, mountains, tiny roads, broad fields... 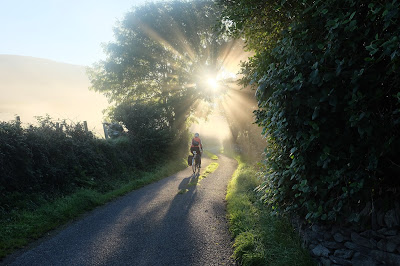 We never actually reached Moll's Gap, although we pretty much were right a stones throw away. Somehow we goofed up our navigation and turned back just below Moll's Gap and returned back where we'd come from to continue on over the modest climb through Lough Brin, and truthfully, I'm glad that's how we went. It made for a longer journey down to Kenmare, but it was so beautiful I would have been sad to miss it. 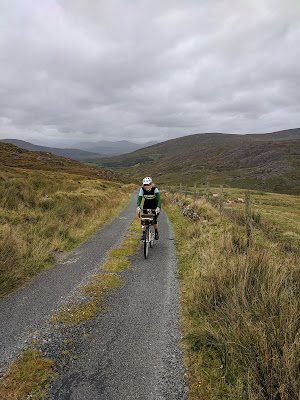 The climbing in Reeks is no joke and we got as much as we could want every day out during our trip. Our second day of riding took us up Priest's Leap and then later back to Kenmare via the climb through the Borlin valley. Priest's was staggeringly steep and I managed to climb it without needing to walk, but barely. I suspect that's the steepest stretch I've ever done and it was a thrill. The landscape is vast and empty. Borlin in contrast was endless and gentle and provided a perfect contrast to the effort of Priest's. We could see our road gently curving up through the valley wall for endless k's in front of us. It was a perfect journey up and over the mountain ridge. 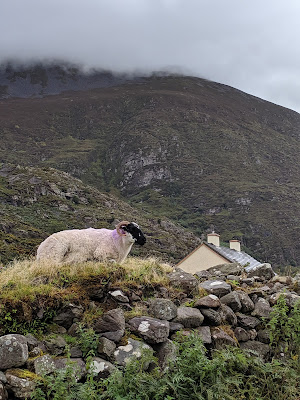 The following days took us into Cork and out to the end of Sheep's Head peninsula, back to Bantry, over Caha pass and back into the mountains of Iverah. Sleeping at the Climber's Inn in Glenview was one of the most deep and cozy sleeps I've had in along while. 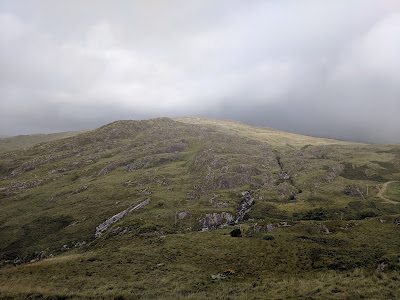 From the mountains we journeyed to the sea and took in the coast in Waterville and then moved north to Portmagee through misty climbs and spectacular views of the Skeligs. 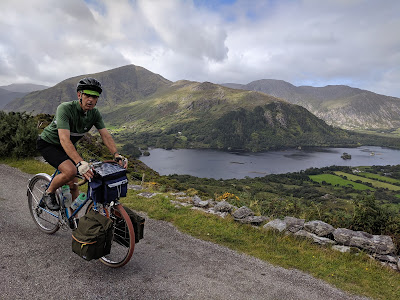 We bade farwell to Iveragh as we made our way to Cahersiveen and then spent the night in Killorglin and began our days in Dingle. We did our time on the N561 until we were gladly able to begin the climb up and over to Camp. There's not much there, but the views are grand as you summit the pass and see mountain above and sea behind and ahead. Our first day in Dingle was a two-fer and after coming down from the climb over to Camp we made the haul to climb up and over Connor Pass. Connor is the highest pass in Ireland and it is dramatic--probably a climb that should be on any adventurous cyclist's list. That said, there are piles of tourists all driving up and down the road and that stands in contrast to some of the more remote climbs we did on the trip. 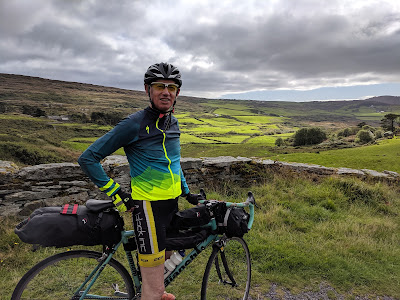 Likewise, our trip out of Dingle around Slea Head was stunning and even sublime... until the fog lifted and the busses and cars showed up. 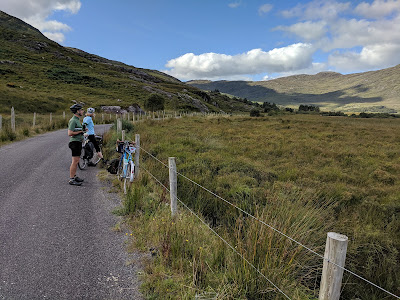 Leaving Dingle for Tralee was our last proper day of touring and a highlight of the day was getting to Inch Beach. James and I braved the bracingly cold water for a swim and Nancy rode effortlessly over the vast open expanse of hardpack beach sand. It was dreamy and an hour or so I will not soon forget.
Email Post
Labels: bicycle County Kerry ireland Luka Bloom 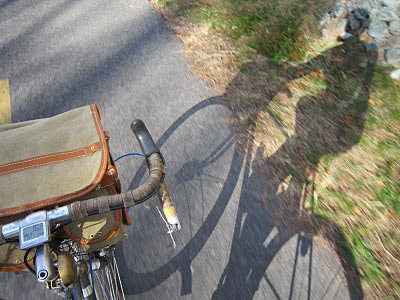 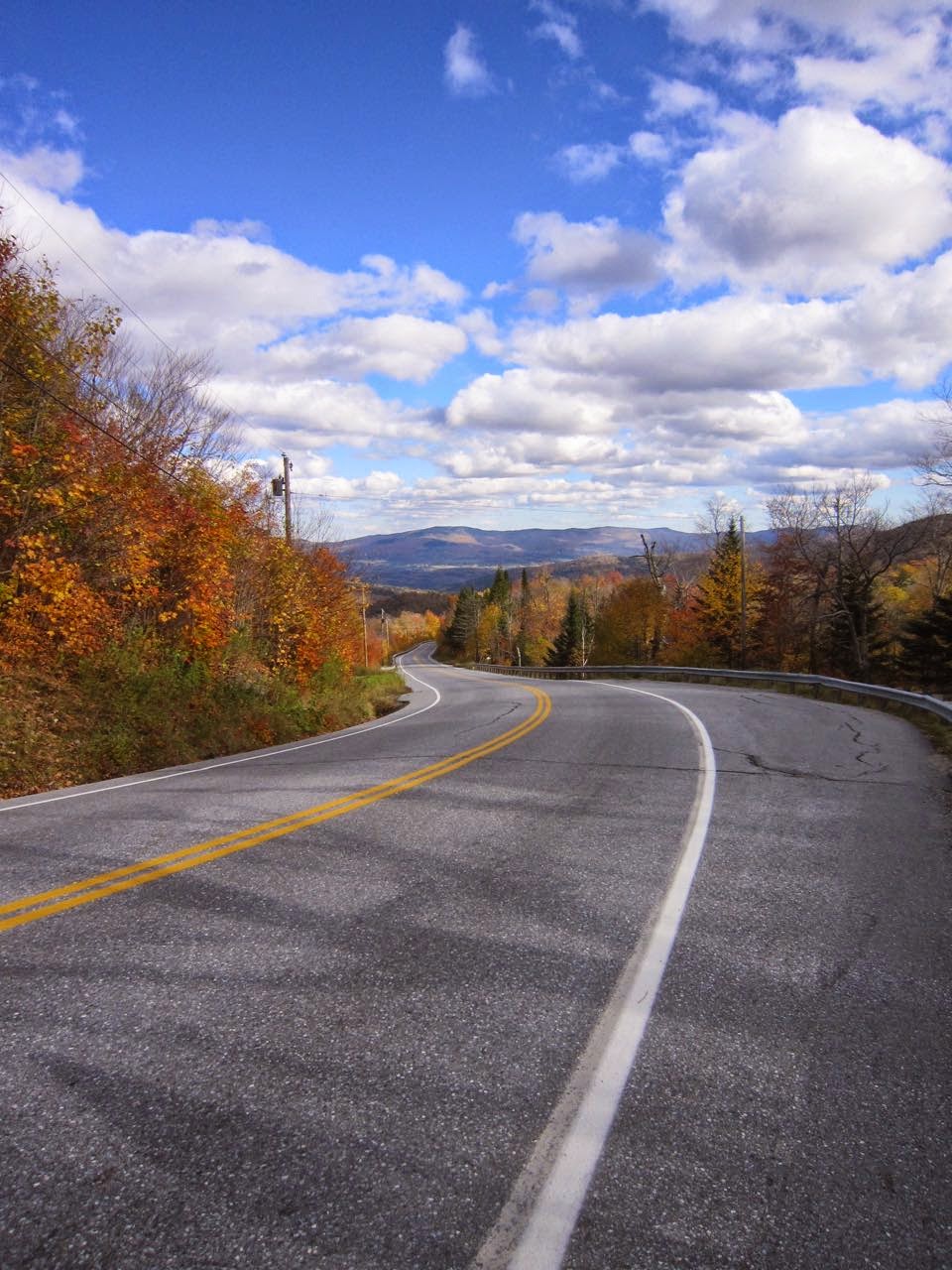